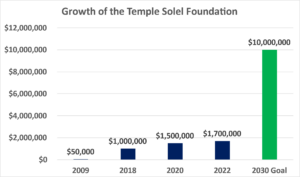 As my parents planted for me, so do I plant for my children.

Temple Solel congregants are deeply involved in the life of the congregation with a strong commitment to its mission and its traditions.  Their generosity of spirit, resources and time reflect their belief in the strength of Temple Solel.  And the Temple plays a special role in our members’ lives and life cycle moments, from birth, naming ceremonies, b’nai mitzvah, weddings to memorials.

In 2012, Temple Solel established the Temple Solel Endowment Foundation as a separate not-for-profit corporation guided by a separate board of directors. The Endowment Board is charged with growing the endowment as well as providing financial oversight of endowment funds. Funds are invested and managed by a professional management firm.

While dues and contributions support the daily operation of the Temple, a strong endowment fund will help sustain and grow the many services and programs provided by Temple Solel.  Planned gifts are “forever gifts” as only income from the Temple Solel Endowment Fund is typically distributed.

Planned giving can be either in the form of a current contribution to this endowment fund or a future legacy gift from your estate plan.  There are multiple ways to make a Planned Gift:  Gift of Cash; Bequest in your Will; Gift of Life insurance, Gift of Securities, Charitable Remainder and Charitable Lead Trusts, and gifting made directly from Retirement Plans (e.g. Traditional IRA’s, 401(k), etc.)

Each type of planned gift has its benefits and we strongly suggest you consult with your tax advisor to determine which methodology best fits your circumstances.

On behalf of the Temple Solel Endowment Foundation Board of Directors, we welcome your interest in planned giving for our congregation.

From strength to strength.

The Case for Planned Giving